SIMPLY SOPHISTICATED DESIGN WITH A TASTE OF THE UNEXPECTED.

jill here... It's a winter wonderland in Iowa.  The snow arrived right on time.  We hope your holidays were filled with special memories.

We have two Pinwheel Punch pillows recently published in the latest addition of Modern Patchwork. 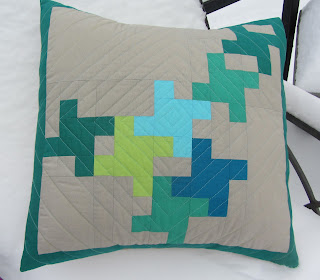 The "cool" version is channel quilted
diagonally from the center.

Hot or cold, hope your new year brings you lots of great quilts!  'till next Tuesday...

Posted by jill/marny No comments: at 9:12 PM 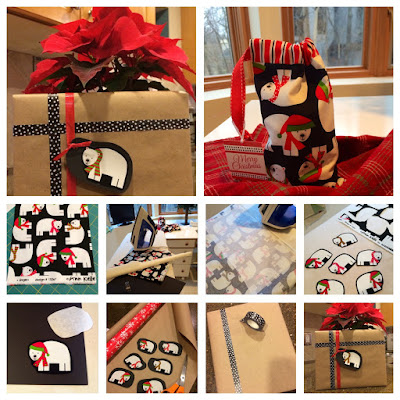 Marny here...every year I make little fabric goodie bags for the spiced nuts we make and share during the holidays. I look for the cutest holiday fabric as soon as the new bolts arrive in the quilt shops, generally in July. I always get a bit more than I need, and today I decided to make gift tags with leftovers. You could raid your stash for this super simple project.


Of course I still have lots of happy polar bears remaining...I see using the gift tag steps to create a matching game for children. The bears have mirror images as well, so the two versions of the same bear could be used as a front and a back of a tiny stuffed animal...so little time...

We send you warm wishes for peace and joy this holiday season.

Till Tuesday...
Posted by jill/marny No comments: at 6:19 AM

jill here...The holiday season seems to roll around faster every year.  Now that I've hosted this annual event for 15 years, the challenge to sew something fun, usable and EASY is my greatest challenge!

This year I chose the infinity scarf.  It's pretty much straight line sewing with a twist.  I precut the fabrics and we were able to take turns using one sewing machine. We still had plenty of time to chat and enjoy lunch after we were finished. 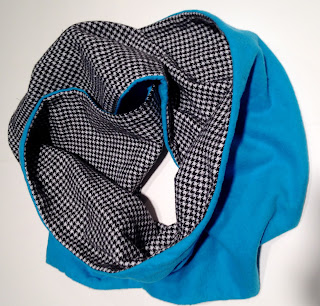 This is one of the finished scarfs; its a herringbone wool blend combined with a solid colored flannel.  I offered several fabric choices so that each participant could make theirs to their liking.

Enjoy the season.  'till next Tuesday....

Pantone Colors of the Year, Serenity and Rose Quartz

We're both here today! First, Jill has a completed quilt to share. Front and back. Remember she first shared the story behind this little Market Values quilt here in Third Time Charm.

The color scheme of blues and pinks segues (sort of) into sharing about Pantone's color choices of the year. Yep that is right, choices. They picked two for the first time. The colors are both pastels, while not a first for Pantone, it is a rarity.

Serenity, is essentially a light (dare I say baby) blue, and Rose Quartz, is described as pale pink. They are meant to be a calming choice in a turbulent world.
Explore Pantone's website and find out so much more about who they are and what they do!

Then go check out new designs everywhere featuring the Colors of 2016!

Confessions of a Material Mission

jill here...after Marny's post last week, I thought I would follow up with some value/transparency exploration.  We will have new samples for class inspiration so I started on an adventure.  What I think will work does not always. So I get a pit in my stomach and keep moving forward.  I refuse to give up, looking for the magic formula.  I will show you what didn't work so well on this quest.
I made some blocks for a maquette, not sewn so I could try different arrangements and fabrics. 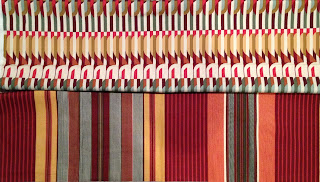 The constraint was to use stripes at the intersections or overlaps of
a Crispy Wonton block (making a small project).
These are two different "stripes" in the same autumnal color way.

With the solids (green, gold and orange) as my base,
I placed the modern "stripe"in what I believed to be the intersections or the overlaps.

I added the repeats of the orange and green to create more symmetry
but still a bit whacky and difficult to "read" as transparency.

I rotated the direction of some of the striped blocks so they all agreed.
It  involved some unsewing but easily fixable. Better

Decided that there were more interactions...
The value of the stipe seems too light to be believable.

Tried the other stripe but it was way too random unless I wanted to fussy cut.  Not.

Changed the value of the gold
and added a regular stripe closer in value.

I'll keep trying to figure out the recipe.   I may have some value misplacement (imagine that)!  Maybe I need a cookie.  'till next Tuesday...

Posted by jill/marny No comments: at 4:22 PM 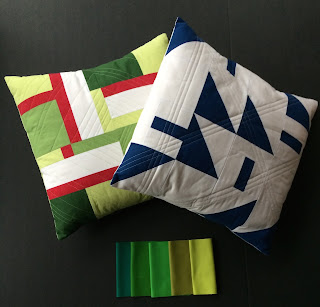 The first one, a Value and Contrast Workshop,
will be held on Wednesday January 27th from 9-4.

We plan to discuss how value and contrast play a key role in our modern aesthetic. The full day workshop will be spent exploring properties of value, balance and negative space. Following two block recipes from our book, Quilts du Jour, we’ll analyze choices and create placement strategies with both solid and print fabrics in 3 projects.  First, Crudites blocks in a runner, second, Salsa blocks in a pillow top, and third, using prints to make Salsa blocks for a baby quilt. New alternative (bonus) settings to complete the in class block/table runner projects included in the workshop! 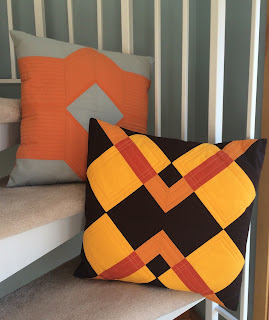 The second workshop focuses on Color and Value Transparencies.
It will take place Thursday, January 28th from 9-4.

Transparency often delivers a taste of the unexpected. It gives added dimension and sophistication to your designs. We plan to discuss color and value transparencies and how they apply to modern graphics and fabrics. We’ll illustrate transparency both within a block and how to create implied overlaps/intersections in quilt design.

Hope to see some of you nearby DMAQG members in the workshops!! We'd love to bring these workshops/lectures to other guilds and shops. Let us know if you're interested!

Posted by jill/marny No comments: at 9:23 AM

Wish I'd had the Hot Hemmer then!

Marny here...we saw a new tool at Quilt Market that would have been super helpful for the curtain panel hemming project that follows. It is called the Hot Hemmer; invented by Joan Hawley and manufactured by Clover.

Find out more about it and watch the video here! I'm picking mine up at the Quilting Connection later today, that is if they haven't sold out already.

jill here....  I just love making baby quilts.  Not only is it fun to celebrate a new arrival but because of their size, baby quilts usually come together quickly.  Market Values sews up in almost no time; the fabric selection is the more challenging aspect.  My constraints were that I would use "stash" fabric and a girl recipient (mom wanted soft colors).

In my stash, there was lots of the large scale saturated pastel floral print (previously used in Cheddar, No Crackers).  That was my start for fun and girlie.  Next was the stripe and an aqua that looked good with it.  I added in some very soft grey. a cute dot and decided pink would be appropriate.  I could only come up with 6 fabrics rather than the prescribed 8 so decided to repeat (actually not at all a problem). Below is the outcome.

So I slept on it. The next morning, I ripped out the center section .  I decided a different value of aqua was the best solution and found a cut dot that was enough value change make the transparency believable.
The third attempt....

Sometimes done is good and cute enough!  Which one will I quilt?  'Till next Tuesday... 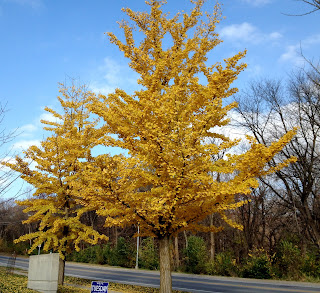 jill here... yesterday was maybe the first Tuesday in over 5 years that we didn't post.  I know, you were all waiting on pins and needles.  It was just one of those days were creativity and inspiration eluded me. So decided to postpone but nothing mind blowing has occurred.

This beautiful November afternoon,  I took a walk.  Two glowing ginkgo trees were in their glory.  I altered my usual route to observe the ISU band practice. The musicians were practicing in their specific instrumental sections, preparing to find harmony as a group. What a fun activity on a beautiful autumn day.  As I walked past the field, a car drove by and a student shouted (and in a not very admirable way) "Hey Grandma"!

jill here...  just getting ready to head back to Iowa.  It was a fun market and even more fun for get it all packed up in just two suitcases and be out of the mayhem in record time.  A great burger, a glass of wine and we're ready for travel early in the morning.

We met so many nice contacts and customers.  Our main goal was just to promote our book and that we did!  Hardly knew how to ring up a sale of our patterns...pathetic.   Back home tomorrow where there is no threat of hurricanes and the pumpkins are awaiting a seasonal celebration!

Marny here...
Last night Jill and I presented a Trunk Show at the Fabricators meeting.  Check out their public Facebook post and pictures of the event here. We want to thank them for inviting us! The members and their guests were so warm and welcoming! We had a blast!


We had fun sharing the pillows and quilts! We really love doing Trunk Shows! Again, thank you to the Fabricators.
Till Tuesday...
Posted by jill/marny 1 comment: at 8:19 AM